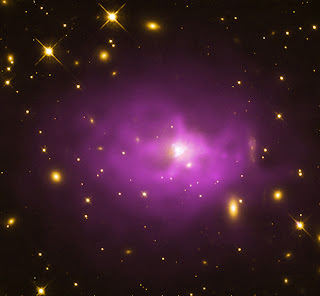 The black hole at the center of this galaxy is part of a survey of 18 of the biggest black holes in the universe. This large elliptical galaxy is in the center of the galaxy cluster PKS 0745-19, which is located about 1.3 billion light years from Earth. X-ray data from NASA's Chandra X-ray Observatory are shown in purple and optical data from the Hubble Space Telescope are in yellow.
Astronomers have long known about the class of the largest black holes, which they call "supermassive" black holes. Typically, these black holes, located at the centers of galaxies, have masses ranging between a few million and a few billion times that of our sun.
This new analysis has looked at the brightest galaxies in a sample of 18 galaxy clusters, to target the largest black holes. The work suggests that at least ten of the galaxies contain an ultramassive black hole, weighing between 10 and 40 billion times the mass of the sun. Astronomers refer to black holes of this size as "ultramassive" black holes and only know of a few confirmed examples
"Our results show that there may be many more ultramassive black holes in the universe than previously thought," said study leader Julie Hlavacek-Larrondo of Stanford University and formerly of Cambridge University in the UK
The researchers estimated the masses of the black holes in the sample by using an established relationship between masses of black holes, and the amount of X-rays and radio waves they generate. This relationship, called the fundamental plane of black hole activity, fits the data on black holes with masses ranging from 10 solar masses to a billion solar masses
The black hole masses derived by Hlavacek-Larrondo and her colleagues were about ten times larger than those derived from standard relationships between black hole mass and the properties of their host galaxy. One of these relationships involves a correlation between the black hole mass and the infrared luminosity of the central region, or bulge, of the galaxy.
"These results may mean we don't really understand how the very biggest black holes coexist with their host galaxies," said co-author Andrew Fabian of Cambridge University. "It looks like the behavior of these huge black holes has to differ from that of their less massive cousins in an important way."
All of the potential ultramassive black holes found in this study lie in galaxies at the centers of massive galaxy clusters containing huge amounts of hot gas. Outbursts powered by the central black holes are needed to prevent this hot gas from cooling and forming enormous numbers of stars. To power the outbursts, the black holes must swallow large amounts of mass. Because the largest black holes can swallow the most mass and power the biggest outbursts, ultramassive black holes had already been predicted to exist, to explain some of the most powerful outbursts seen. The extreme environment experienced by these galaxies may explain why the standard relations for estimating black hole masses based on the properties of the host galaxy do not apply.
These results can only be confirmed by making detailed mass estimates of the black holes in this sample, by observing and modeling the motion of stars or gas in the vicinity of the black holes. Such a study has been carried out for the black hole in the center of the galaxy M87, the central galaxy in the Virgo Cluster, the nearest galaxy cluster to earth. The mass of M87's black hole, as estimated from the motion of the stars, is significantly higher than the estimate using infrared data, approximately matching the correction in black hole mass estimated by the authors of this Chandra study.
"Our next step is to measure the mass of these monster black holes in a similar way to M87, and confirm they are ultramassive. I wouldn't be surprised if we end up finding the biggest black holes in the Universe," said Hlavacek-Larrondo. "If our results are confirmed, they will have important ramifications for understanding the formation and evolution of black holes across cosmic time."
In addition to the X-rays from Chandra, the new study also uses radio data from the NSF's Karl G. Jansky Very Large Array (JVLA) and the Australia Telescope Compact Array (ATCA) and infrared data from the 2 Micron All-Sky Survey (2MASS).
at 00:35