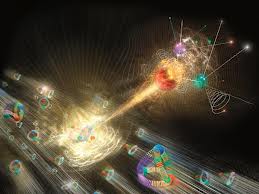 The world's favourite particle is proving far too well-behaved for physicists' liking. The first major update from the Large Hadron Collider since a particle resembling the Higgs boson was discovered in July rules out one way in which the boson might open the door to new physics, and weakens another.


What's more, direct searches for particles not accounted for in the standard model of particle physics, our leading theory of the fundamental particles and forces, are also coming up empty. "I would, as a hunter of new physics, have liked to see it different than what we have now," says Albert De Roeck of CMS, one of the two major detectors at the LHC, which is based at CERN near Geneva, Switzerland. "But the data is the data."

Since the Higgs is credited with giving mass to other elementary particles, a well-behaved one might seem like a good thing. The trouble is that the particle is predicted by the standard model, which must be incomplete as it doesn't contain any mention of dark matter and gravity.

Back in July it seemed like the newly-discovered boson might reveal clues as to how to extend the standard model – there were still gaps in the data that might have allowed for some unexpected properties.
Tau-tau

The Higgs isn't detected directly, but rather by a slew of other particles it is predicted to decay into. One tantalising anomaly was a lack of elementary particles called tau leptons in this debris. The Higgs is supposed to decay into a tau and its antiparticle, but if it doesn't, this could suggest the existence of non-standard model particles.

Today, experimentalists from CMS and the other main LHC detector ATLAS, armed with twice as much data as they had in July, told the Hadron Collider Physics symposium in Kyoto, Japan, that the number of tau particles detected has crept up. The new data can't yet rule out a deviation from the standard model but they do remove the main reason for thinking there was one in the first place. 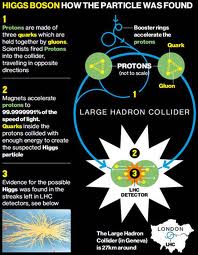 Christoph Paus of CMS says the decay into tau particles is still "a high priority because they have some potential for not agreeing with our expectations".But it does seem as though this source of new physics may have run dry. "In short, all that hullabaloo about a deficit in the rate for Higgs decays to tau/anti-tau was much ado about nothing," wrote Matt Strassler of Rutgers University in Piscataway, New Jersey on his blog.
Mirror image identical

How the new particle decays isn't the only thing that could pry open the standard model. The theory also says the Higgs boson behaves the same when viewed in a mirror, giving it what's called "positive parity". Back in July, the particle's parity wasn't known, leaving open the possibility that its mirror images aren't identical. Such misbehaviour could have been a sign of an elegant extension to the standard model, called supersymmetry.

Yet again though, the Higgs seems to be toeing the standard model line. At the symposium, CMS also reported a signal suggesting that its parity is positive, with a statistical significance of 2.5 sigma, meaning that there is only a 1 in 100 probability that a signal like this is produced by chance.

"The particle discovered at the LHC looks more and more like the particle that was predicted," Steven Weinberg, who won a Nobel prize in 1979 for theoretical work on elementary particles, told New Scientist.

As if the good behaviour of the Higgs boson wasn't frustrating enough, direct searches for new physics at the LHC have turned up empty too. Physicists presented searches for dozens of particles that would exist in a world governed by some of these new theories, including the squarks and charginos, neutralinos and gauginos predicted by SUSY.
Persistent oddity

There is one oddity left over from July though, that may yet yield clues to physics beyond the standard model: the Higgs seemed to decay twice as often as predicted into pairs of photons.

Some thought there could be a non-standard model particle decaying to produce the extra photons. Others cited the photon excess as possible evidence that the Higgs itself could be a composite of other particles – rather than the elementary particle predicted by the standard model.

Intriguingly, despite collecting significantly more data on this decay rate, neither experiment has provided an update. De Roeck says they need more time to do crosschecks and wouldn't be drawn further. "We had the result, we had a discussion, it was interesting, but the collaboration felt we needed to push a little harder," he told New Scientist.

Haijun Yang of ATLAS says the analysis of the diphoton decay rate is ongoing and will be updated later. Weinberg has previously said it would be a "nightmare scenario" if the LHC discovered a Higgs boson that did just what the standard model predicted and nothing more. But he says it's still too early to tell if that is where we're heading.

"It is disappointing that no new physics has shown up yet," says Tony Gherghetta, a theorist from the University of Melbourne in Australia. However, he adds that other SUSY particles – such as stops or gluinos – could still show up before the end of the year, when the LHC is set to shut for a year.
at 22:28