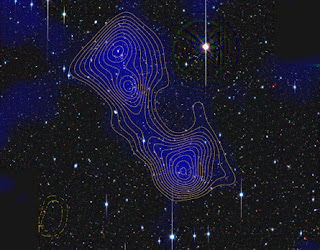 An invisible web thought to span the cosmos has now revealed one of its strands.

That thread is spun of dark matter and connects two titanic clusters of galaxies, some of the most massive objects in the universe. Its discovery supports the idea that galaxy clusters grow at the intersections of such filaments, and its heft backs the claim that filaments hide more than half of all matter.


“Filaments of dark matter have never been seen before,” says Jörg Dietrich, an astronomer at the University Observatory Munich in Germany, whose team reports the finding online July 4 in Nature. “For the first time, we successfully mapped one.”

As the name suggests, dark matter is difficult to detect because it gives off no light or other radiation. The material’s presence is typically inferred by measuring how its gravitational pull changes the motions of stars and galaxies.

But look closely, and the shy matter can provide more direct evidence of its presence. Its gravity warps the fabric of spacetime and bends light passing nearby, so that more distant galaxies beyond the intervening dark matter appear distorted.

This lensing has already revealed dense clouds of dark matter kicked out of colliding galaxies. (SN Online: 3/06/12; SN: 8/26/06, p. 131) Filaments should likewise produce the fun house–like distortion. But since the dark matter in such structures isn’t as dense as the clouds ejected by galactic smashups, the effect is much weaker.

“With current telescopes … it’s very difficult to detect a filament,” says Lindsay King, an astrophysicist at the University of Texas at Dallas.

To improve the odds of seeing one, Dietrich and colleagues focused on Abell 222/223, a pair of galaxy clusters that are close together and thus should be connected by a relatively massive filament. X-ray observations had already revealed a ribbon of hot gas between the clusters — the first hint of a dark matter link. Using the Subaru telescope in Hawaii, the researchers looked at light from distant galaxies passing through the space between the clusters.

Sure enough, the distorted shapes of the galaxies revealed a thick cord of matter with a mass comparable to that of a small galaxy cluster. Gas can account for only about 9 percent of that mass. Dark matter seems to make up the rest.

The new study won’t resolve the ongoing debate over the composition of dark matter; several candidate ingredients have been proposed. But understanding the structure of filaments could help to reveal their role in building galaxy clusters by funneling in gas or whole galaxies.

“We’re starting to connect the dots,” says Meghan Gray, an astronomer at the University of Nottingham in England who wasn’t involved in the study. “In the future I expect we will extend this and see more of these filaments.”