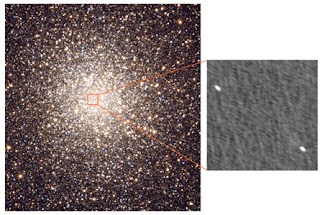 Hiding in a clump of stars 10,000 light-years away are two small black holes, slowly sipping their stellar prey.


But the black holes shouldn’t be there — at least, not both of them. The snacking pair disobeys prevailing theories that predict the survival of only one black hole in M22, a globular cluster of stars. And, like cockroaches and rats, observing two means the cluster could contain many, many more small black holes — perhaps as many as 100, a team of astronomers reports in the Oct. 4 Nature.

“If there really are tons of black holes in there, then my old theory is completely toast,” says astrophysicist Steinn Sigurdsson of Pennsylvania State University. “This is a really nice piece of work.”

The two black holes are located roughly one light-year from the core of M22, an ancient ball of stars that orbits the Milky Way’s center. The black holes are between 10 and 20 times as massive as the sun, placing them in the stellar-mass, or featherweight, class. Many stellar-mass black holes are known to exist, but this pair is the first observed in a Milky Way globular cluster. “M22 is not the first [Milky Way] cluster where I would have predicted we’d find a black hole,” says Gregory Sivakoff, an observational astrophysicist at the University of Alberta in Edmonton. “This is the first convincing evidence,” he says, noting the slim chance that the black holes are actually located behind the cluster instead of inside it. “But there’s still room for some healthy skepticism.”

Initially, the astronomers were poking around in search of intermediate-mass black holes, a sparsely populated class of middleweights with only one known member. But instead of seeing anything resembling a middleweight, the team was surprised to see the two small black holes within the cluster.

The two objects showed up as unexpectedly bright radio sources in observations made using the Jansky Very Large Array in New Mexico. But since they didn’t glow in X-ray images taken with the orbiting Chandra X-ray Observatory, the black holes are probably feeding slowly, sipping, rather than gulping, their stellar prey, says coauthor Jay Strader of Michigan State University. It’s the first time radio observations have been used to spot small black holes; Strader suggests there might be others out there, eating neatly enough to evade detection by another method.

Astronomers aren’t yet sure what type of stars the black holes are feeding on, but they suspect that M dwarfs — stars that are smaller and dimmer than the sun — are the stellar feast.

Scientists are also still puzzling over how the two black holes came to reside in the cluster. “Globular clusters are sort of the crowded dance halls of our Milky Way,” Sivakoff says. “Most of the black holes are basically thrown off the dance floor.”

Sigurdsson likens the process to a wild billiard break, with black holes careening around the table — some ejected, and some bouncing back in before being shot back out. “The ones that go into the cushions — it takes them a while to come back into the center of the table,” he says, suggesting the black holes could be caught in a state of rebound. “M22 is a fluffy cluster, so things happen more slowly.”
Though only one is predicted to survive, these black holes aren’t necessarily heading for a celestial death match — yet. “We really don’t know their future well,” Sivakoff says. “We’re having enough problems predicting their present.”