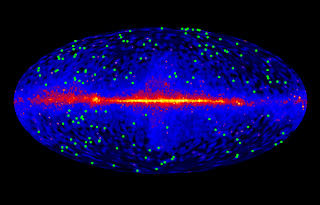 Light from the universe’s very first stars still lingers in space. Now, astronomers have a new way to catch it: Distant, ultra-bright galaxies that act as cosmic beacons, capturing relict photons in a blaze of gamma rays.


But it’s not just these earliest photons that are snared; photons from every star that ever shone can be captured. “We now have constraints on the total number of stars that ever formed,” Volker Bromm, an astronomer at the University of Texas at Austin, says of the new way to see old light, described online November 1 in Science. “It provides us with a review of the entire history of cosmic star formation, including the very first epochs of star formation in the very early universe.”

Studying these stellar fingerprints will help astronomers learn more about the universe’s earliest years — and its first inhabitants, which are too far away to be seen directly. Now roughly 13.7 billion years old, the universe is thought to have switched on the first stars about 400 million years after the Big Bang.

“Detecting these stars is very important but currently impossible,” says astrophysicist Marco Ajello of the Kavli Institute for Particle Astrophysics and Cosmology at Stanford and a coauthor of a the new study. “In this way, we are already able to set constraints on the amount and role of these stars in the early universe.”

Normally, it’s tricky to separate relict starlight from everything else that’s shining in the universe. Dust, visible starlight, glowing material chucked out of supermassive black holes — it’s all rattling around out there, muddying the signatures of primordial stars. “If we were located outside the Milky Way, then we could have measured the background light more easily,” says Avi Loeb, an astrophysicist at the Harvard-Smithsonian Center for Astrophysics. “We are embedded too deep inside the galaxy.”

To circumvent this problem, Ajello and his colleagues used the orbiting Fermi Large Area Telescope to study distant blazars, a type of bright, active galaxy. Blazars are powered by supermassive black holes that shoot enormous jets of energy toward Earth. The jets include gamma rays, a high-energy form of radiation that can interact with photons from the early stars.

Photons colliding with a blazar’s gamma rays are converted into electrons and their antimatter particles, called positrons. The transition produces a dimming effect that the Fermi telescope can detect, and the amount of dimming corresponds to amount of photons between Earth and the blazar.

Since blazars are distributed across the universe, astronomers can use them to measure the photon fog at different ages, and calculate the contributions from early stars.

Ajello and his colleagues used 150 blazars to parse these early photons from the rest of the cosmic melee. So far, they’ve managed to peer at the shimmering universe as it appeared when it was just 4 billion years old, and the team plans to follow up with blazars at greater distances and earlier ages.

The measured amount of photons “limits the amount of light produced by earlier generations of stars and black holes,” Loeb says. “An early population of very massive stars is only allowed to exist when the universe was less than 500 million years old.”

These results suggest that early stars may have formed a bit more slowly than previously thought, Ajello says. Unlike today’s stars, which incorporate many heavier chemical elements, the first stars were primarily made of hydrogen — and they lived fast and died hard, Ajello says. “The first stars were in general more massive — up to hundreds of times as massive as the sun — hotter, brighter, and more short-lived.”
at 17:11